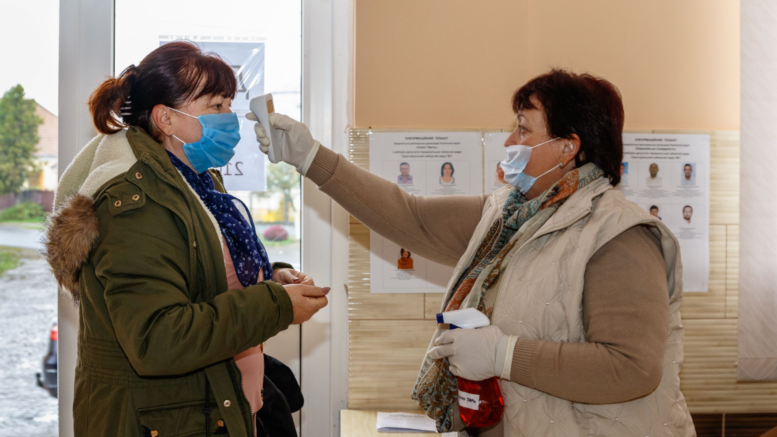 The usual administrative routine, critical to hold any elections at the proper level, has been complicated with new challenges related to the pandemic for the past nine months. COVID-19 has changed the electoral process, forcing governments, parties, candidates, and voters to adapt their strategies to safety and health-related risks.

To understand what challenges arise when holding an election during the pandemic and how they are assessed by election administrators, we conducted a panel survey of precinct election commission members. The survey was conducted in two stages: before and after Election Day. Accordingly, 401 PEC members were interviewed before the election (the total sampling error does not exceed 4.8%). At the second stage, 348 PEC members were re-interviewed (the total sampling error does not exceed 5.2%). The survey was conducted by telephone interviewing. The sample covered five districts of the Lviv Region and was stratified by type of locality (urban/rural) and size of election precincts (large/medium/small).

We asked the PEC members about their reasons for participation, the level of provision with personal protective equipment (PPE), compliance with anti-epidemiological measures, as well as problems at their election precincts on Election Day

By occupation, educators (20%), unemployed persons (13.5%), pensioners (8.7%), health workers (8.5%), entrepreneurs (6%), and students (5.2%) were the majority of the commission members. 75% of the PEC members had previous experience in working in election commissions. 49.9% of the members took part in one to four election campaigns. Every fourth member of the commission experienced work in the commission for the first time.

During the pandemic, it was important to “rejuvenate” the election administration to deflect the hit from one of the risk groups – elderly people. Experts directly and the CEC indirectly emphasized this before the election. The latter recommended, “to take into account that certain social categories are at high risk of COVID-19 complications, in particular when proposing candidates to the election commissions”. Although on average, the PEC members did not “rejuvenate” during the local elections compared to the previous presidential elections, they were still quite “young”.

Mobilization and Reasons for Participation

In Ukraine, the political model of election administration is used, when political parties and candidates are responsible for forming the commissions. The Electoral Code provides those political parties having their factions in the Parliament with guaranteed quotas of representation in commissions. The general logic of PEC formation is as follows. If the electoral subjects propose more candidates to a commission than provided by law, then it primarily includes representatives of political forces with guaranteed quotas. The remaining seats are divided between other parties and candidates through a lottery. If the “supply” of vacancies exceeds the “demand”, then relevant territorial election commissions are responsible for staffing PECs.

Although there were warnings before the election about a possible shortage of commissioners, parties and candidates generally managed to mobilize PEC members. The results of the survey indicate two main mobilization channels: 54.9% of the commission members were recruited directly by party and candidate headquarters, and 27.9% learned about the possibility of working in the commission from their relatives and friends. 7.7% of the PEC members applied to parties and candidates for employment in the commission on their own, and another 5.7% learned about this at their main place of work. Traditionally, recruitment through party networks and family/personal ties remains the most common practice of mobilizing commission members.

We asked the PEC members how they treat their work in the commission. The respondents were offered a choice of two answers: 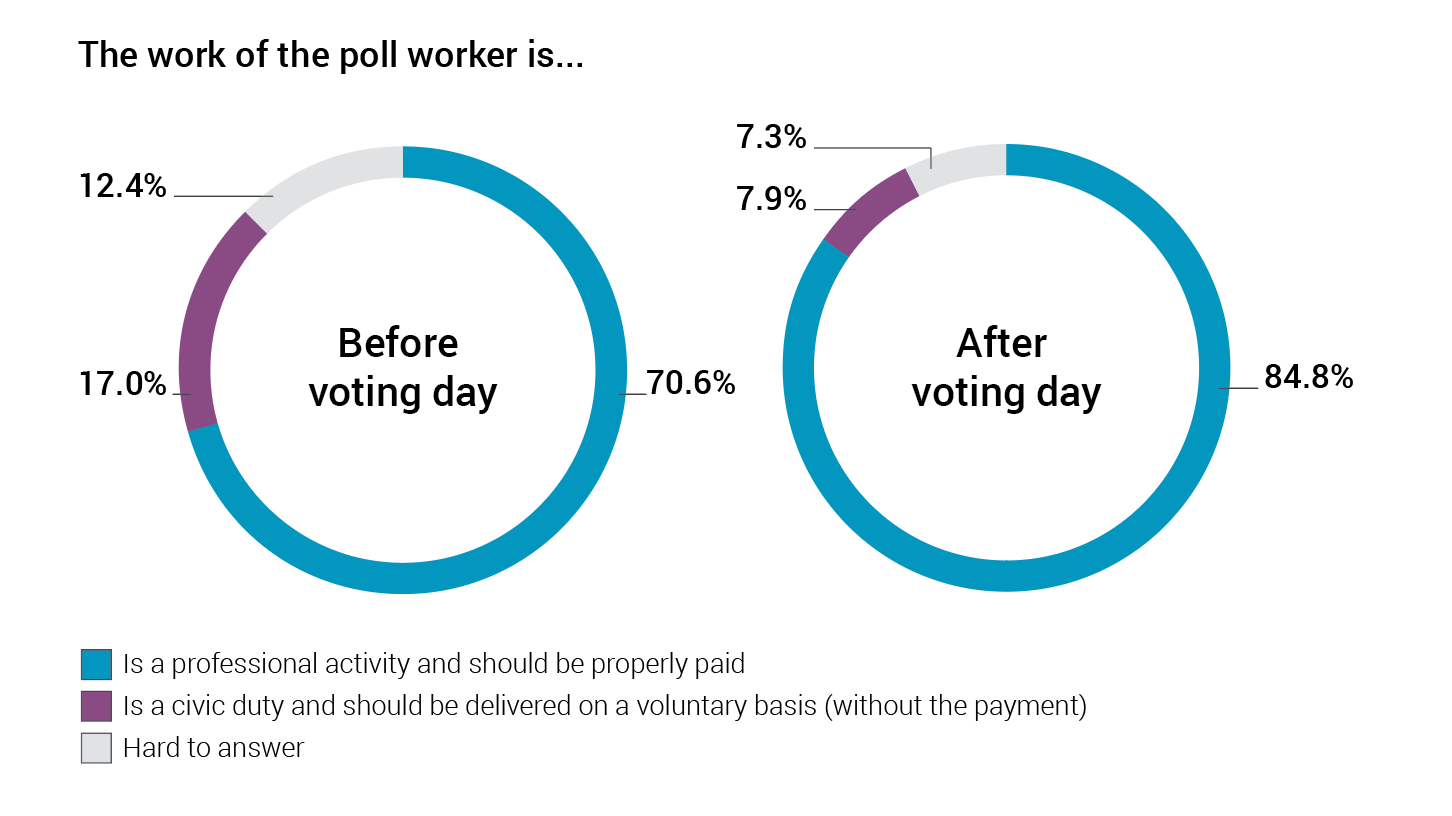 Even during the pandemic, most of the PEC members find their work as professional and paid employment rather than free volunteering. The increase in support for the first position by 14.2% after Election Day can be explained at least in two ways. First, it was only after the election that the PEC members were able to assess the scope of the tasks they performed during the election process. It is possible that some members of the commissions initially underestimated the level of burden that fell on their shoulders. Especially on Election Day and Election Night. Second, the PEC members could underestimate the risks associated with the coronavirus when agreed to work in the commissions: infection, complication, and related expenditures. A more precise answer to this question requires further research.

Previous research by the election administration in Ukraine has shown that there are two main sources of remuneration for commission members: the state and the electoral subjects. The funds are paid “officially” in the first case, and “in envelopes” in the second. The research shows that compensation from parties and candidates is important for a significant number of commission members. This may be since the electoral subjects pay more for the services of PEC members than the state does. As a result, the state that is unable or unwilling to review the remuneration of election commission members ignores the fact that the latter are supplementary financed by parties and candidates. However, the issues of legality, conflict of interest, and election integrity are taken off the table in this “tacit agreement” by both the state and the electoral subjects.

In general, the election during the pandemic did not fundamentally change the importance of the financial incentive for the PEC members: they do their work for which they expect a proper reward. The pandemic did not affect the state’s approaches to financing the election administration, which operated under unusual conditions. In fairness, it should be mentioned that there was a legislative initiative to increase the salaries of commission members before the election, however, it was never implemented.

Training of the Commission Members

74.8% of the commission members attended training organized for them by parties/candidates, territorial election commissions, and public organizations. 97.3% of the respondents said that they had been told about the pandemic-related safety measures to be observed at the election precincts on Election Day. Therefore, it is necessary to pay tribute to the parties and candidates who included information about COVID-19 in their training programs, risking losing some commission members. 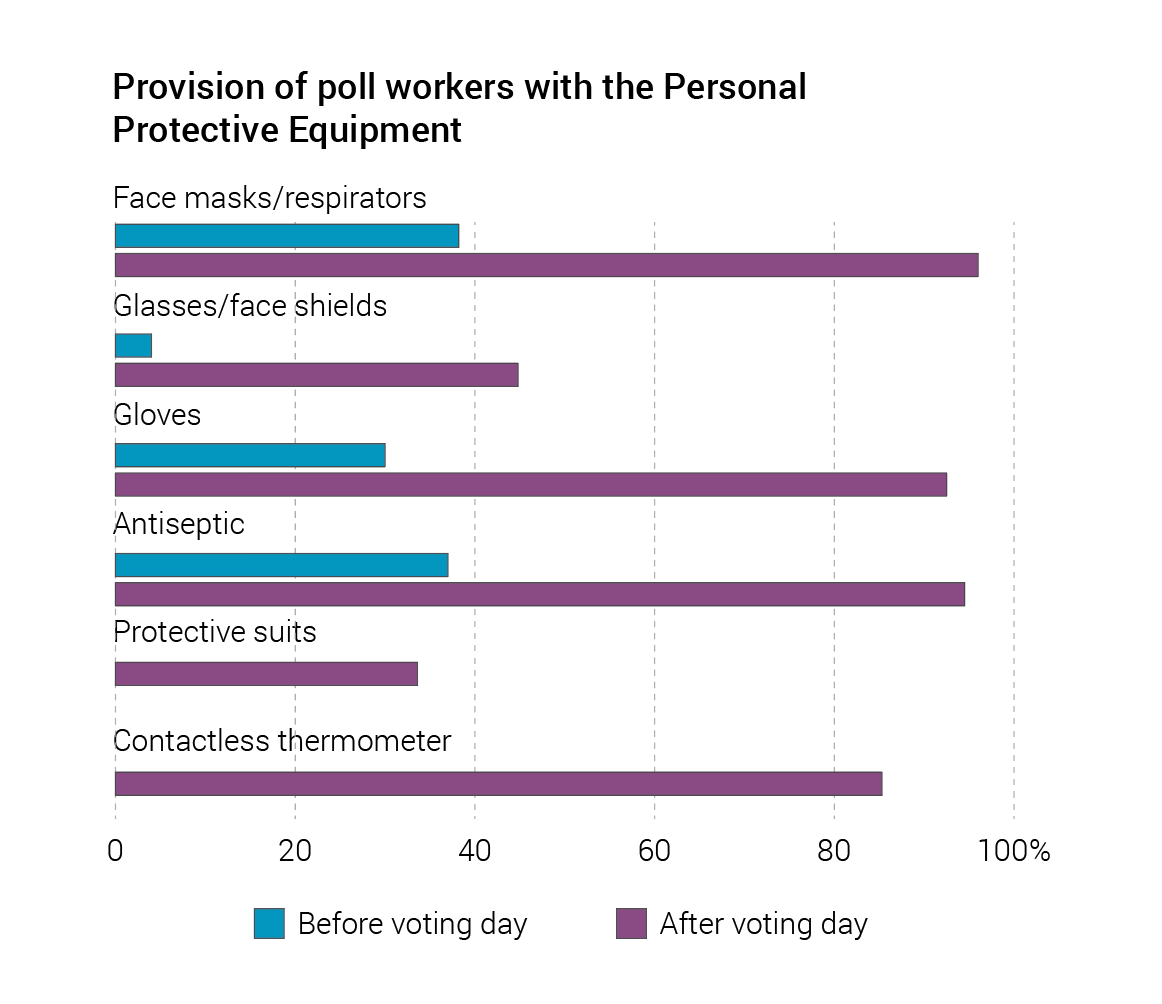 On Election Day, the PEC members duly kept a social distance from their colleagues, voters, and wore protective masks and gloves.

It should be noted that the proper implementation of some CEC recommendations did not depend on a poll worker during the quarantine. For example, the CEC recommended local authorities to use, if possible, separate entrances to and exits from election precincts. Only 17% of election precincts were able to provide it according to the website of the State Electoral Register. But room managers did not always allow the commission members to use separate entrances and exits even though there was such a possibility.

The PEC members rated the risk of COVID-19 infection on Election Day highly during the survey before the election than after the election. This is about the risk of infection both to them personally and to other commission members, voters, and observers. 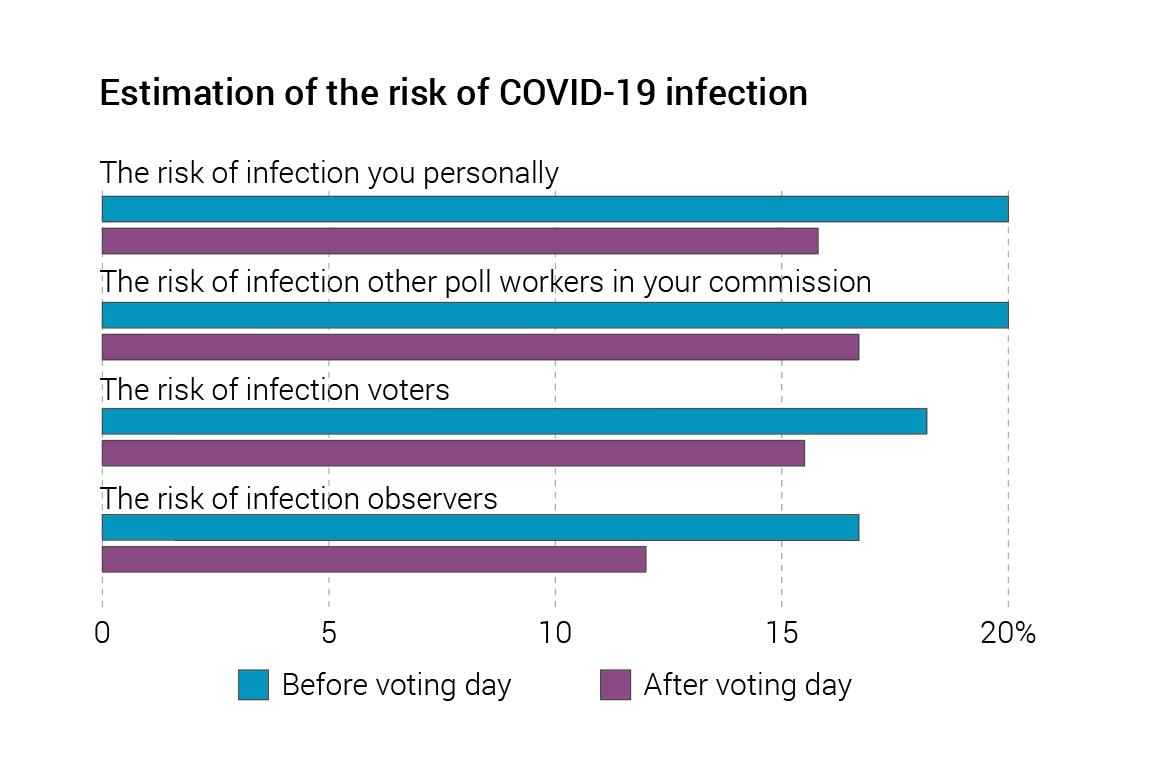 This difference can be explained by several factors, in particular, better provision of PPE on Election Day than the days before it.

We obtained a similar difference in the results from the answers to the question about the risk of COVID-19 infection when the PEC members performed various functions at the election precincts. The commission members associated these functions with a higher risk of infection before the election than after the election. 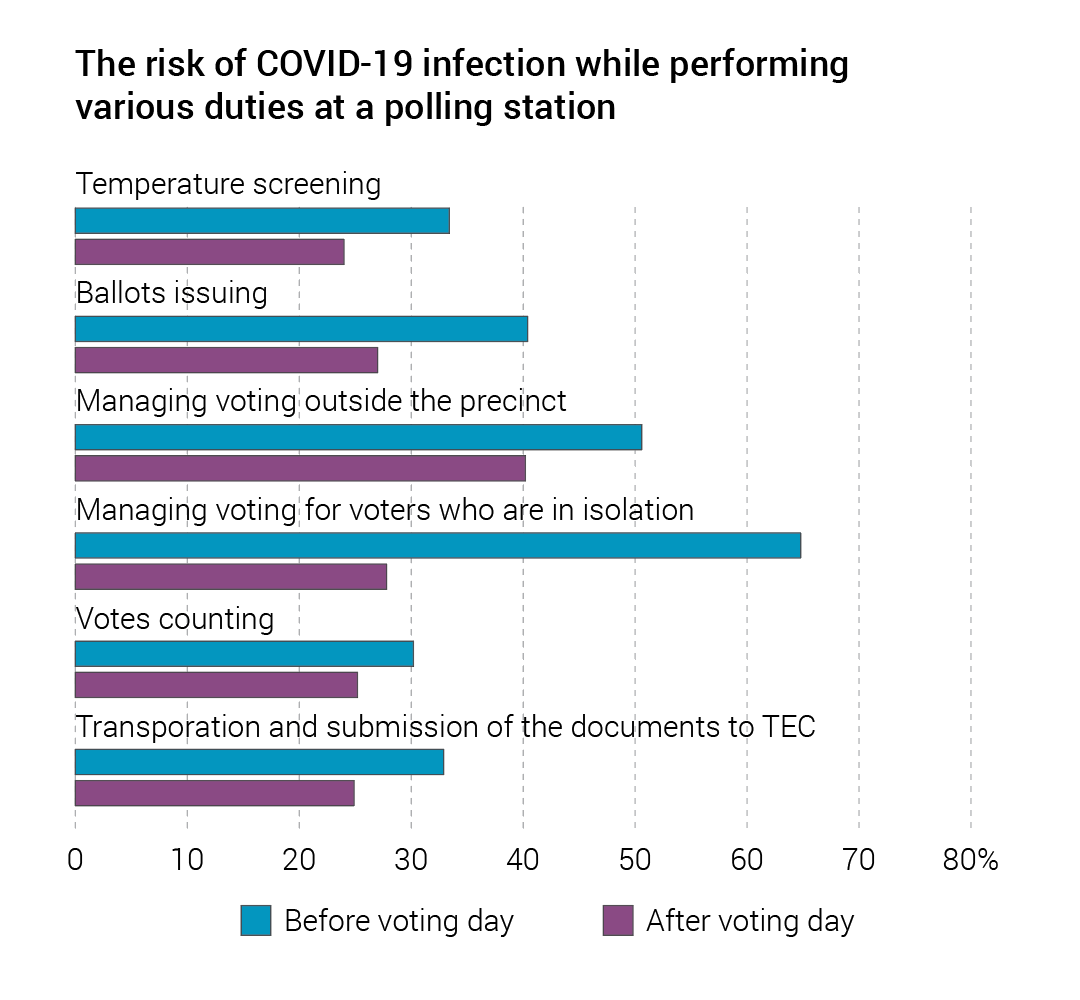 The highest difference in the risk rate assessment was recorded when organizing voting for voters in isolation. This can be explained by the fact that not all the election precincts registered such voters, and therefore there was no need to organize voting for them. Accordingly, some commission members found it difficult to assess the risk of infection in this situation. 53.7% of the respondents refused to answer this question after the election.

Problems on the Election Day

The PEC members overestimated the likelihood of most of the proposed list of possible problems before the election. Except for voter queues at the election precincts. Besides, one in four respondents indicated that voters did not comply with anti-epidemiological restrictions on Election Day. 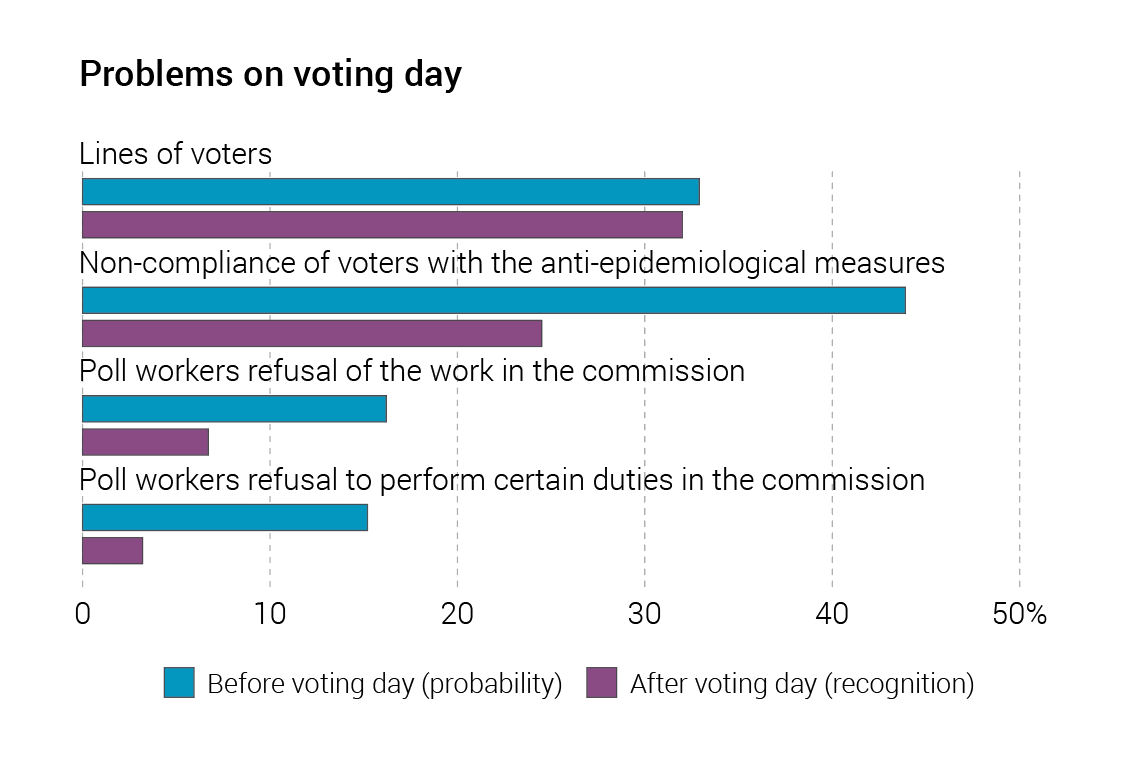 The level of refusal was also overestimated of the PEC members to serve on the commissions, as well as their refusal to perform certain functions on Election Day.

Evaluation of Experience and the Probability of Participation in the Future

72.4% of the commission members positively assessed the experience of working in the commissions (10.9% – as very positive, 61.6% – as positive). 71.3% of the PEC members are ready to consider participating in election commissions in the future. This suggests that the difficulties encountered in preparing for and conducting the last local elections did not have a critical negative impact on the majority of the PEC members. Their experience in administering elections during the pandemic is an important resource itself that, if maintained, will be useful for future election campaigns. Especially if the threats posed by the pandemic persist.

The Ukrainian government and local authorities had more than six months to adapt the domestic election administration system to the challenges posed by the COVID-19 pandemic. The local elections were the first full-fledged opportunity to test the effectiveness of the work done. Despite the lack of critical problems during the elections in terms of anti-epidemiological training, some points still require refinement and correction. After all, today it is unknown under what epidemiological situation the next elections will take place.

First, attention must be paid to the provision of PEC members with personal protective equipment throughout their work. The study shows a significant gap in the provision of the commissions with PPE before and on Election Day. Also, the quality of PPE must be controlled so that poll workers can use them properly.

Second, we need to work on reducing voter queues at election precincts on Election Day. Of course, the pandemic was not the only and main cause of queues in almost every third precinct. It is worth mentioning the new design of ballot paper and the simultaneous number of elections, which forced voters to spend more time in voting booths. However, during the pandemic queues of voters can complicate, even for other reasons, compliance with anti-epidemiological measures, especially with social distance.

Third, local authorities should audit election precincts and, if alternative, consider relocating them to those places which comply with anti-epidemiological requirements. Above all, this means that those places should be equipped with separate entrances and exits, and they should be larger ones.

Fourth, the PEC members’ assessment of voters’ compliance with anti-epidemiological measures on Election Day suggests the need for further public awareness efforts. Such efforts should help reduce the risk of infection both to poll workers and voters.

Fifth, the government must regulate the remuneration of PEC members. The research shows that financial reward is an important incentive for commission members. In this matter, the state should not constantly rely on the electoral subjects’ financial muscles and their “good will”. After all, under certain circumstances, parties and candidates may lose interest in financing the election administration, as that was before.

This material by the Monitoring-Analytics Group CIFRA is part of the German Ukrainian Researchers Network (GURN) project, which was made possible thanks to the financial support of the Foreign Office of the Federal Republic of Germany.

The project is being implemented by the Institute for European Politics (Berlin) in conjunction with Ilko Kucheriv «Democratic Initiatives» Foundation (Kyiv), New Europe Center (Kyiv), and think twice UA (Kyiv). The responsibility for the contents lay solely on the Monitoring-Analytics Group CIFRA. The material does not necessarily reflect the position of the Foreign Office of the Federal Republic of Germany.